International holiday bookings surged by as much as 600 percent after Britain laid out plans to gradually relax coronavirus restrictions, giving battered airlines and tour operators hope that a bumper summer could come to their rescue.

EasyJet said flight bookings from Britain jumped over 300 percent and holiday bookings surged by more than 600 percent week on week after the government indicated on Feb. 22 that travel could restart from mid-May, Reuters reported.

Holiday company TUI U.K. said that its bookings surged 500 percent, while holiday and budget airline group Jet2 said its bookings were up 600 percent.

This summer is make-or-break for many airlines and holiday companies which are struggling to survive with close to a year of almost no revenue due to pandemic restrictions. Without it many will need extra funds after burning through cash reserves.

While British tourists are some of the biggest spenders in Europe, the presence of a more infectious variant of coronavirus in the United Kingdom could alarm some countries. France and Spain have shut their borders to most U.K. travellers due to variants.

U.K. holidaymakers will know more on April 12 when the government publishes a travel review. It has said that a lockdown ban on most international travel will stay until at least May 17.
TUI said destinations in Greece, Spain and Turkey were the most booked overnight, with people opting to go from July onwards.

Last year, more than 12.7 million foreigners entered Turkey amid the pandemic, down from nearly 45 million in 2019, generating $12.6 billion in tourism revenues.

British tourists made 6.7 percent of all foreign visitors, behind travelers from Russia (16.9 percent), Bulgaria (9.5 percent), Germany (8.9 percent) and Ukraine (8 percent). 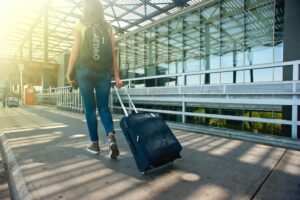 This affordable Didim apartment is found a short distance from…